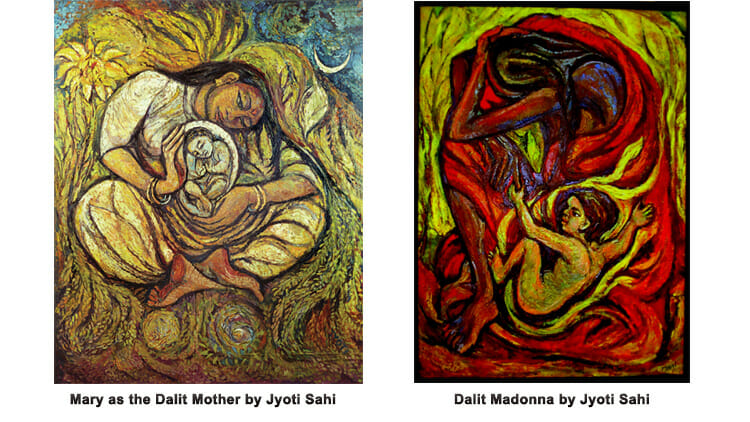 The condition of many Dalits or the ex-untouchables remains tragic even after seventy years of independence. A recent article reveals that atrocities on Scheduled-Castes or Dalits increased six percent in the last decade (2009 – 2018) based on the reported crimes alone.[1] Inadequate Dalit representations in the government and private institutions leave the untouchables to be the continuing social and cultural discrimination victims.[2] The taste of dignity, respect, and self-esteem are hardly explored flavors for many Scheduled-Caste Indians of today. Christianity forbids inequality so the Dalit proselytes surely escape the caste-hierarchy. In reality, ex-Hindus carry their profoundly embedded social hierarchy and stratification ideas with them. The question is being a Dalit Christian is any different from an untouchable Hindu? In this article, we concisely analyze Dalit Christian Theology in a historical perspective, drawing Dalit and Dalit Christian roots, Arvind P. Nirmal’s initiation and perception on Dalit theology, and end it with a personal review.

Oxford and Cambridge dictionaries define Dalit is a member of the lowest caste in South Asia. But that is not it. The word “Dalit” is derived from Sanskrit and translated as “broken, torn, downtrodden, crushed, destroyed”, which is also similar to the Hebrew term dal and has similar significance in its meaning.[3] They are also identified as Scheduled-Castes (SC), outcastes, or avarnas since they lie outside of the four Hindu castes, moreover, Hindu dharma brands them in Hindu religion as “non-humans.”[4] Gandhi called the untouchables as Harijans which means “children of God – Hari”, but Dalits perceived and rejected the expression of Gandhi as it was more patronizing and contrasting with their real-life experience.[5]

Overall, in India, nearly one out of five Indians is a Dalit.[6] Though SCs are called as ex-untouchables by mainstream media, the inhuman untouchable practice is found and exists in ninety-nine forms at 1,589 Gujarat villages, a study in 2009 shows.[7] This picture in Gujarat is a preview of existing caste atrocities on Dalits of all India. So calling the SCs as ex-untouchables is appealing irrelevant even today since their inhuman treatments from society are alive and active as ever before.

In 1917, Ambedkar returned to Baroda to pay back his grant to Maharaja by serving as a military secretary, but he was shocked at the welcome he received from his colleagues as well as his subordinates.[8] He was ill-treated as a polluted and unclean person though he had two doctorates from the world’s two prestigious institutions, he was not given a place to rent in Parsi hotels either because he was a Dalit, which made him return to Bombay.[9] A century later, India still behaves in a similar fashion with openly advertised property tags such as “Brahmins Only” and “Vegetarians Only.”[10] There is no marketing space is witnessing of “Dalits only” and “Non-vegetarians Only” labels. Moreover, 70 percent of Dalits own no land and 90 percent of workers employed by the Government of India as street sweepers, manual scavengers and clean toilets are the Scheduled-Castes, the largest employer among them all is the Indian Railways.[11]

At least 70 percent of Christians in India are of Scheduled-Caste origin, their religious conversion is linked to many social, cultural, economic, political, and religious factors.[12] Though upper-caste Hindu organizations claim that Dalits and tribals are in the Hindu framework, they never gave much attention to improve the socio-economic status of the lowest-caste Hindus.[13]

According to Christian tenets, caste system practice has no origin and non-existent in the Bible. The caste ideology of showing a Hindu God as its inventor contradicts with the Biblical God. The 1991 Mandal Commission Report recognizes the caste practice even among the Indian Christians, and witnesses Scheduled-Caste Christians’ unchanged poverty existence as well as the unchanged state of caste discrimination victims.[14] In India, mostly surnames are caste titles and the caste names are the last names. For example, keeping high-caste or Savarna surnames such as Sharma, Joshi, Thakur, Reddy hinders and creates fear among the lowest-caste Christians, especially the untouchable Christians who previously as Hindus never allowed to be present among Savarna Hindus. On the other hand, former Hindu oppressors most likely do not change their stand against ex-untouchable Hindus.

The exclusion of Dalit Christian from the Scheduled-Caste list is only adding more fuel to the existing socio-economic injustice fire. Initially, Dalit converts were called as Christians of Scheduled Caste Origin (CSCO) but later the Christian Dalit Liberation Movement in 1985 chose to categorize as “Dalit Christians” since the term “Dalit” gave them a dignifying identity.[15] Many proselytes chose Christianity over Hinduism as a ticket to the vehicle of the social ladder, and Smith calls it one of the main reasons for the conversion movements among tribal and Dalits of India.[16]

In the late 1960s, the whole world was witnessing many people’s movements, and the Black Panther Party (BPP) is one among them, which was founded by two black college students Bobby Seale and Huey P. Newton to empower the oppressed African American communities.[17] Namdeo Dhasal and J.W. Pawar founded the Dalit Panther as a reaction to fight the mounting events of caste atrocities in 1972, which was inspired by the BPP.[18] There is an ongoing debate that Dalits converted to Christianity only to escape caste-hierarchical discrimination. Did all Scheduled-Caste Christians reach the socio-economic-political pinnacle? The Mandal Commission survey informs that the Dalit Christians are still part of socio-economic disparity, the Brahminical political class opposes and fears to include them under Scheduled-Caste’s reservation list which may catalyze the massive conversion of Dalits to Christianity.[19]

Indian churches influenced by Sanskritized rituals and Hindu philosophical ideas did not appeal to the Dalit Christians and felt alienized albeit they form the majority of the Christian population.[20] The traditions which are usually denied to an ex-untouchable Hindu were dominating the Church premises and Indian Christian theology. Assuming the Brahminical tradition is the tradition of the whole of India made Dalit Christians raise a question on understanding the traditional Indian culture. The various socio-cultural movements in the early 1980s certainly influenced the untouchable Christians, especially the Dalit political movements.[21]

The birth of Dalit theology traced back to a paper presentation by Arvind P. Nirmal at United Theological College, Bangalore in 1981.[22] Initially, the lecture was labeled as “Towards a Shudra Theology” but Nirmal argued that it wasn’t a pan-Indian Christian ideology rather it represents unpopular Dalit experiences, sufferings, ambitions, and hope by a Dalit.[23] Later in his book, he published the speech as “Towards a Christian Dalit Theology.” Arvind expressed his wish of Dalit theology is a product only of the untouchables to counter the Indian Christian theology seasoned with Brahminic tradition.[24]

Nirmal calls Dalit theology as “a methodological exclusivism” away from Vedic Indian Christian theology, implies that the Triune God affirms and sides with the Dalits (the oppressed) and not with the non-Dalits (t­­he oppressors).[26] He was not opposing the non-SCs to involve and contribute to Dalit theology. However, the Dalit experience is unparalleled and unique, its depth of misery and pathos should inform Dalit theology, others can participate in it through empathy and sympathy.[27] Though Nirmal’s statement may sound arrogant, it may have truthful intentions. Mandal’s two notable opinions may support Nirmal’s view:

First, caste system is a great conditioner of the mind and leaves an indelible mark on a person’s social consciousness and cultural moves. Consequently, even after conversion, the ex-Hindus carried with them their deeply ingrained ideas of social hierarchy and stratification … non-Hindu minorities living in a predominantly Hindu India could not escape from its dominant social cultural influences. Thus, both from within and without, castes among non-Hindu communities receive continuous substance and stimulus.

Nirmal entitles the exodus experience of Dalits is greater than the experience of the Israelites and uses Deuteronomy 26:5–12 as a model for developing Dalit theology.[30] This Deuteronomic creed affirms the identity by dealing with the subjects of ancestral roots and historical consciences. The liberation process in the Exodus is represented by ‘a mighty hand’, ‘an outstretched arm’, and by terror.

Nirmal condemns Hindu gods such as Ram who killed a Dalit in a story for performing rituals. He debates the promised savior to the Old Testament prophets was revealed in Jesus Christ is a Dalit God. In other words, “He is a servant God – a God who serves” and gospel authors identify Jesus Christ with the suffering servant of God (Isaiah 53.61), moreover, Jesus suffered as a Dalit who “encountered rejection, mockery, contempt, suffering, and finally, death” even though He is the Son of God and the Son of Man.[31] He was with marginalized people who are excluded from society and fought for their rights, on the cross He cried in an agony of God’s abandonment. “That feeling of being God-forsaken is at the heart of our Dalit experiences and Dalit consciousness in India”, Nirmal says.[32]

In Dalit Christology, it is impossible to separate the Dalit issues, its realization, embedded Dalit consciousness, and self-worth since “their full humanness” complete through Christ.[33] Nirmal believes that this newly received consciousness through Jesus can empower Dalit minds, a new sense of dignity. For the Dalits, the suffering is something they cannot separate with their life, they are powerless, possess no wealth and they are the punching bags of Indian society. Jesus as a Dalit became more meaningful and personal, seeing Christ is one among them suffering and received injustice death.

Nirmal calls out that Nazareth manifesto in the Lukan gospel emphasizes “the gospel Jesus brought was the gospel for Dalits and not for non-Dalits.”[34] He makes Jesus a true Dalit deity, which helps the Dalit Christian feel associated with Brahminical Indian theology. Previously the Vedic philosophies kept Dalits as aliens by not allowed inside the temple and so did the traditional Indian Christian theology, but the only difference is Dalit Christians were inside the church.

So far, we saw only A.P. Nirmal’s initiation and theology. One of the things bothers me why he said Dalit theology is only for Dalit theologians not for non-Dalit theologians. It sounds like how Brahmins restricted Vedic study only for themselves for centuries. Probably in the 1980s, the national situation and Dalit movements may have pushed Nirmal to take that view. However, I think he would have changed his view if he is alive today and allowed non-Dalits to contribute to Dalit theology.

On the other hand, the Christian theologians’ negligence toward Dalit Christians is true to some extent and Nirmal’s claim on doing Dalit liberation theology necessitates it to fill the void in Indian churches. Even today, Christians are called with slur words ‘Rice Bags’ or ‘Rice Christians’ assuming all Indian Christians come from a Dalit background and activities like Ghar Wapsi (Back to Home) hinders and challenges Dalit Christians. Nirmal’s effort should be appreciated and there is a long way to go, for instance, Dalit Women are the most oppressed among Dalits and their issues need to be addressed too. Many faithful contemporary Dalit theologians are expanding this liberation genre, there is a divide among them too. I believe that doing theology by affirming scriptural authority is should be the prime aspect and context comes second.

Overall, caste-apartheid followed into the church was unfortunate and hard to miss it now. Many centuries of long-suffering of Dalits both inside and outside the church is real. A.P. Nirmal was attempted to address it by creating the Dalit Christian liberation theology which was influenced by the world and church movements. The main theme of Nirmal’s Dalit theology to create an identity and rightful place for Dalits both in church and society, he sowed the seed of Dalit Christian liberation theology and it became a tree and is growing.