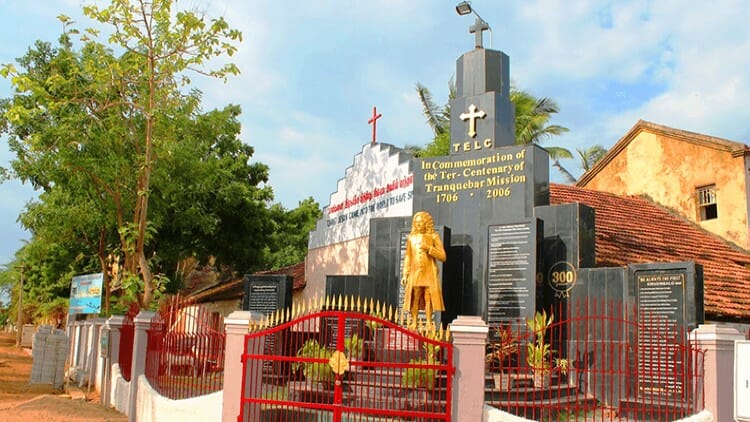 1. The first Protestant missionary to India

Bartholomew Ziegenbalg boarded the Princess Hedwig Sophia on 29 November 1705. He later compared the seven-month sea journey to India via the Cape of Good Hope to an “academy of death,” replete with terrors from wind and waves, pirates and freebooters, seasickness, men overboard, and near shipwreck on the shoals off Ceylon. On 9 July 1706, as the ship weighed anchor outside the harbor of the Danish Crown Colony of Tranquebar, Ziegenbalg wrote in his diary, “Hitherto hath the Lord helped us!”

2. The Danish King initiates the mission

In Copenhagen, early in 1705, the newly crowned King of Denmark, Frederick IV was conversing with his recently appointed German pietist Court Preacher, Dr. Franz Julius Luetken, about the sending of missionaries to Denmark’s overseas possessions. Initially, Ziegenbalg hesitated to accept the offer, yet never expressed a clear refusal. Later he found that his name along with another student Joachim Lange had already been forwarded to Court Preacher Luetken in Copenhagen. Lutheran authorities balked at ordaining the men (Bartholomew Ziegenbalg (1682–1719) and Hein-rich Plütschau (1677–1747)), and church leaders across Europe protested when they set sail.

The King wanted them to catch the November sailing of the Danish fleet. While Luetken’s first letter had mentioned the Danish West Indies, the second letter now specified the West African “slave coast” of Guinea with its murderous climate as the proposed destination. The King altered the destination of the missionaries’ journey for the third time. The experiment was to take place in India, land of many religions, and high culture, rather than the slave coast of West Africa.

In the beginning, Bartholomew Ziegenbalg was startled by the religious life of the Hindu-Brahmins around him. Later he made a field study of their beliefs and practices. Although he uses phrases like ‘foolish heathenism’, ‘heathenish darkness’ and ‘blind heathens’, he appreciated the Hindu belief in one Supreme God Almighty. This initial appreciation of positive elements in Hinduism, while pointing out the negative side, later gave way to more accurate perceptions.

Bartholomew Ziegenbalg brought out the first New Testament in the Tamil language in 1714. In fact, it was the first Indian language Bible was produced ever. Not only the Bible translation, but Ziegenbalg also studied Tamil thoroughly, worked on a dictionary, and published a grammar.

He called the Tamil Bible as Vedapusthagam (Veda-Book) and Vedaagamam (Veda and Agamas together) from the term Veda. He did this to claim a superior status for the Bible over and above the Hindu scriptures. More recently, Tamil Christians – both Roman Catholic and Protestant – prefer the term viviliyam, which is a transliteration of biblion. In choosing viviliyam they have acknowledged the Bible as one among the many scriptures of the world, deriving its authority from the community of faith that claims it as its scripture.

The brilliant achievements and groundbreaking activities of Ziegenbalg are:

Bartholomew Ziegenbalg and Heinrich Plutschau’s DANISH-HALLE MISSION is the origin of the Lutheran movement in India. The mission welcomed the first Asian converts to Protestantism, one of whom, a wealthy widow named CLORINDA, helped build the first Protestant church in Asia. In all, 49 Germans, six Danes, and one Swede served in the Tranquebar mission. But we must now turn to the remarkable reception of this first Protestant mission in Europe. PIETISM was a movement in the Lutheran Church that called for spiritual transformation in the lives of Christians via prayer and Bible study. Its enthusiasm provided the energy for the missionary endeavor.

In 1715, Ziegenbalg toured Europe to build support for the mission work. He eventually won the support of two Anglican agencies, the SOCIETY FOR PROMOTING CHRISTIAN KNOWLEDGE (SPCK) and the SOCIETY FOR THE PROPAGATION OF THE GOSPEL IN FOREIGN PARTS (SPG), both originally established to support Anglican ministers in the American colonies.

Ziegenbalg was succeeded by Benjamin Schultze (1689–1760) who carried the work into Telugu and Hindi speaking communities. The work among the Tamil was carried on by Johann Philip Fabricius (1711–91), who spent 50 years in southern India, completed the Bible translation, and translated a number of hymns and Lutheranliturgical materials. Arriving in 1750, Christian Friedrich SCHWARTZ spent 48 years laying the foundation for the present Lutheran Church of India. The mission languished in the 19th century, and the CHURCH MISSIONARY SOCIETY (CMS), a British-based Anglican agency, assumed the support. Eventually, church members were absorbed into the various Lutheran churches that were created to serve the different Indian language groups.